The Little Toy Drum That Could

Vernacular Tooling in the Southern Berkshires 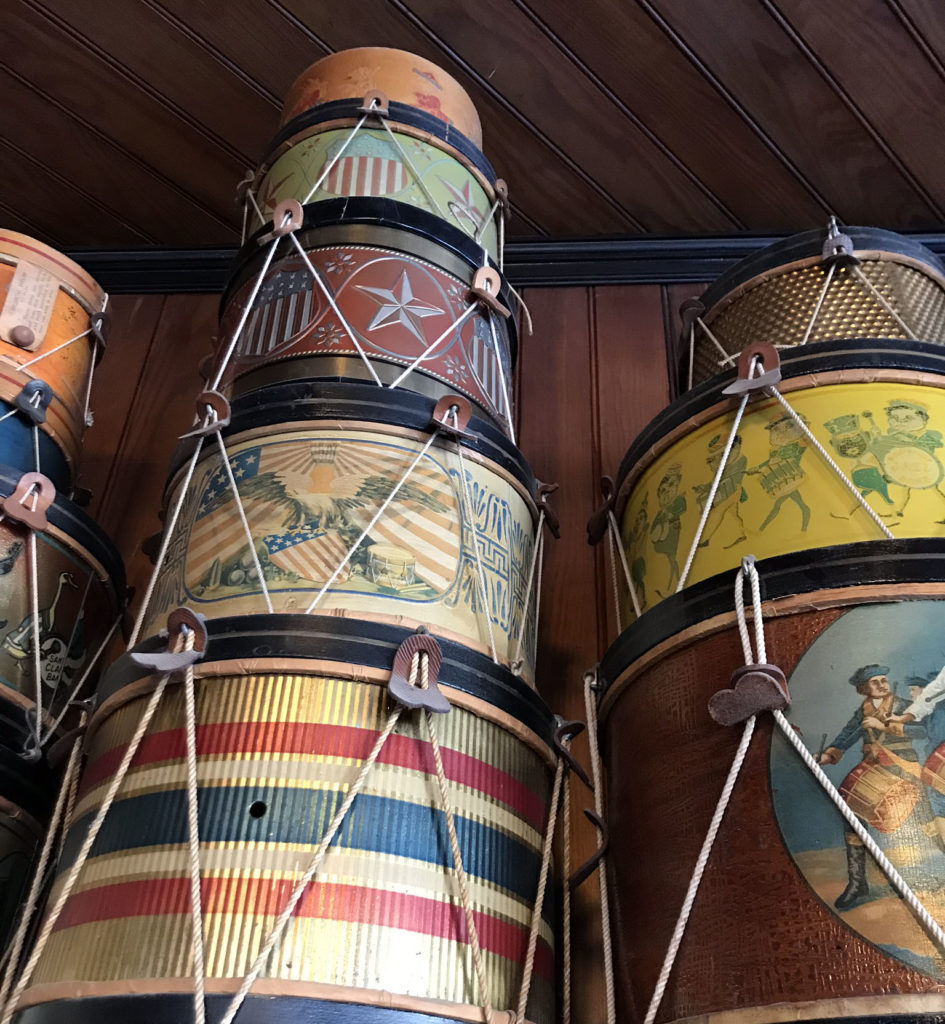 The Depression years were pretty good for the company because a toy drum was inexpensive and big; it looked like a lot around the Christmas tree. – Jay Jones, President of Noble & Cooley

From toy drums to today’s premiere steam-bent drums made from locally sourced hardwoods, a family owned company in the Berkshires has stayed in business using good old Yankee ingenuity for 165 years!

I credit Tim Lloyd, former executive director of the American Folklore Society, for introducing me to Noble & Cooley Drum Manufacturing Company. In an email he wrote, “They’re located in Granville, in the southwestern part of the state, and have been in business since the mid-1850s. During the Civil War they supplied snare drums to the Union army to be used as battlefield communications tools. Nowadays they still make world-class snare drums, but in recent years they began making state-of-the-art drum sets too, all using a combination of 19th, 20th, and 21st century technologies.”

Who knew? I certainly didn’t, which is odd, since I frequent the southwestern corner of the Berkshires frequently.

Noble & Cooley dates to 1854, when master mechanic Silas Noble and entrepreneur James P. Cooley founded the business as a toy drum manufacturer. In their first year they made 631 toy drums. After the Civil War, their factory employed 17 people who produced 80,000 drums annually.

Current-day owner and president Jay Jones is a 6th-generation descendant of James Cooley. We made a date for a tour of the manufacturing plant and museum. Jay forewarned me that most of the plant and museum are unheated. Indeed, the day I visited, it was 26 degrees outside.

Noble & Cooley [N&C] is in Granville, a sparsely populated rural region of southwest, Massachusetts. Just before Route 57 curves dramatically to the right, I take a left on Water Street. A few hundred yards down on the right, a sign indicates the way to Noble & Cooley. Just beyond a small pond, several massive 19th century buildings come into view. A few outbuildings, including a boiler house, comprise the rest of the property.

Jay Jones greets me as I step inside the main building. We have a brief conversation before going up to tour the museum and manufacturing plant. The tour takes us through two of the larger buildings and onto multiple floors. Sometimes it is hard to tell where the museum ends and the manufacturing plant begins.

I ask Jay how he learned the family business. “I started working here in fourth grade.”

“And you live in Granville?”

“A mile away. My commute is one mile and one left turn.”

The museum displays historic objects including 19th century printing machinery, tools, foundry-making wood patterns, drums, toys, reproduction photographs and signage. We stop in front of a text panel describing a drum made for Abraham Lincoln out of a rail he had split. Jay recounts an entry from his great, great, great grandfather’s diary in August of 1860, “Finished the Lincoln drum today, the finest thing ever made.” The drum was then presented to the First Massachusetts Regiment that served in the Civil War. N&C drums were used in Civil War by northern regiments. Granville sent 111 men off to the Civil War; 16 did not make it back.

Another museum case draws attention to the National Peace Jubilee which was held in Boston in June 1869 to commemorate the end of the Civil War. It was organized by Irish immigrant Patrick Gilmore, famous for composing “When Johnny Comes Marching Home.” Gilmore wanted to help heal the nation by putting on this huge party of song. A humongous temporary pavilion built on Copley Square. The stage was built to hold a 10,000-member chorus and a 1,000-piece orchestra.

As part of the effort, Noble & Cooley built the drum for the party. It was the world’s largest drum at the time, Jay tells me, adding “Two very large oxen were used to make those drum heads. The drum measured eight feet in diameter and was emblazoned with block letters ‘LET US HAVE PEACE.’ It was celebrated at every rail stop from here to Boston for the party.”

The tangibility of Yankee ingenuity is evident throughout the rambling manufacturing spaces. Jay defines Yankee ingenuity as “what it took for a couple of 19th century farmers to become manufacturers and adapt throughout history, to stay economically viable.” He recounts the arc of history, “They started with wooden toy drums and military marching drums, then expanded to ping pong paddles, tin toy drums, wooden reels for an explosive manufacturing company, ice buckets, waste baskets, and since 1984 high end custom-made drums. The only tie-in theme throughout the whole timeline was the toy drum.” The company has survived a fire, two world wars, and the 1994 NAFTA agreement.

We enter a room with overhead pulleys and belt shafts. This is where the steam bending of wood takes place.

“These machines were designed and built in the 1870s. And I still use them every month because they still meet that one requirement: they work.”

Seeing 19th century machinery come to life to bend steamed wood, burn decorative patterns into a drum shell, or print multiple colors on tin is remarkable, especially in light of the planned obsolescence of 21st century tools and appliances.

Noble & Cooley survives as an example of manufacturing firms that were once plentiful in the remote valleys of New England. The NCCHP website reminds us that “The area has a unique heritage in small-scale industry. . .  Local farmers, faced with diminishing returns in agriculture and shortages of labor, turned to mechanized manufacturing to survive.”

Throughout the plant are examples of vernacular tooling, meaning, technical and mechanical problems which have been solved with tinkering and resourcefulness. Examples include figuring out how to cut 250 toy drum heads at a time or how to drill multiple precisely placed holes in a piece of wood at once. The plant is full of machinery for which one can’t buy parts. “You take it apart, figure out what’s wrong, and build it yourself.”

In 1926, Jay’s grandfather designed and built a machine for printing up to eight colors sequentially. It was the first 8-color, self-inking rotary printing press. Jay notes, “At the time, we could so far out-produce our competition and speed up our production, that the machine was kept a trade secret and was never patented.” (When a curator from the Smithsonian’s National Museum of American History saw it, she wanted the one-of-a-kind machine for their collection.)  The Connecticut River Valley was ripe with tool and dye innovation. Or as Jay put it, “It was the Silicon Valley of the 1800s.”

As manufacturing power evolved from water to steam to direct current to alternating current, Noble & Cooley adapted. For steam power, they housed the steam engine in a separate building.  A line shaft ran the whole length of the building so one could tap off power to any machine from that source.

We are standing in front of a Lady’s leg steam engine, which when running generates about 60 horsepower. Jay offers a possible etymology of the phrase “balls to the wall,” which means running at full speed or full force.

“This is the governor on the top,” Jay says pointing to two ivory colored balls.  The fly ball governor maintains the rpm of machinery. While it’s running, the balls fly up with centrifugal force . . . . When somebody slips a belt onto a machine to start a machine, everything slows down. As it slows down, the balls drip and it pulls open the steam valve to put more steam in to get more speed. This is the device that came up with the term “balls to the wall.”

And what about those locally sourced hardwoods? All of them come from within 20 or 30 miles of the factory. A friend of Jays is a logger who gets his coffee every morning at the Granville Country Store. Jay goes over to meet him and says, “Hey, Dan, I need another oak log.” A different neighbor has a bandsaw mill in his back yard and customs saws the wood at a half inch thick.

Pointing out a stack of maple slabs that was just delivered, Jay says, “This tree was probably growing on Saturday.”

Today, most drums that make up the typical drum set are made from a plywood composite. Noble & Cooley were the first to bring back the solid wood, steam bent shell back in the 1980s. Now there are several other companies doing this.

Jay’s son Nick started working at Noble & Cooley in high school. Since graduating from college in 2006 with a degree in audio production, Nick has worked full time for the family business. We find him on the second floor, having just shut off the router. He uses the router to roughly sand the bottom of the drum shell until it is perfectly flat. The next step involves using a combination of scraping and sanding to get the edge the exact same width all the way around. Jay explains that if the edge is wider in an area or thinner in an area, it’s going to set up overtones in the drum. “We want it perfectly flat and the head contact area the exactly the same all the way around. It’s that attention to hand scraping and detail that makes it sound better.”

Jay acknowledges that a lot of modern manufacturing is modernized. “It’s computer controlled for speed and efficiency. But I feel, for a musical instrument, you really have to have that tactile, hands-on approach.”

Beside the sheer beauty of the finished instruments I wonder aloud what it is about a Noble & Cooley drum that is so special.

Attend one of their culminating events this summer

In the meantime, read through the program guidelines and register for an info session.