Prescription: A Dose of Dance 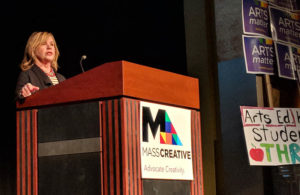 The following is a transcript of remarks from Mass Cultural Council Executive Director Anita Walker at MASSCreative’s 2019 Arts Advocacy Day.

I just read about a new book that contends “the bright side has been denied the attention it deserves.” That’s not because there isn’t plenty of bright side. I’m looking at it…all of you…filling this hall.

When company towns like Pittsfield and North Adams lost the sole source of income for thousands of families you were there…the artist entrepreneurs…taking a chance, setting up shop in empty mills and storefronts and ushering in the creative economy.

When the local economy wasn’t strong enough to support basic services, you were there…the theaters, museums, dance companies…energizing a tourism industry that brings in millions of dollars from out of town and out of state.

And when innovation replaced manual labor as the coin of the realm, you were there, the artist in the schools, nurturing creative minds and critical thinking.

You were there to prepare us for a world where the biggest companies move fast and break things…where rigor and risk go hand in hand, and where the commodity is the idea…just as it is in art.

You were there to energize a new economy.

But as Robert F. Kennedy reminded us decades ago, the Gross National Product is not the only measure of a healthy society. In fact, it does not measure that which makes life worthwhile: the beauty of our poetry, the intelligence of our public debate, the integrity of our public officials, and I would add, our sense of well-being.

Our art, our intelligence, our integrity, our sense of well-being. These are the best of being human. And they are threatened.

And thank goodness you are here, and already on the front lines.

We know, even more intensely after reactions to the long-anticipated Mueller report this weekend, that the people of our nation are politically far apart. But we are apart in so many other ways as well.

There’s an unsettling anger in the air, that permeates the airwaves, social media and the millions of screens consuming our attention. It may as well be a contagious virus, an infection that’s out of control. An infection that is not spread by human contact.

But human contact may become a luxury. Our no-eye-contact, screen addicted, isolated society that has delivered an epidemic of loneliness, depression, and division is running rampant among those who are struggling. While the well-healed enjoy clubs and company and personal assistants.

Consider Bill Langlois, from Lowell. He was featured in the Sunday New York Times.

He’s retired, living on a fixed income. Like so many seniors he spends lots of time home alone while his wife is out of the house. He tears up now when he talks about the day he got a companion, a cat he named Sox.

But it’s not a real cat. It’s an avatar, a computer program, that talks to him by way of distant operators in the Philippines. This technological companion with a voice like Siri makes him feel cared for.

Bill is not unlike millions of seniors who, with no one to talk to, are turning up in emergency rooms just for some social interaction.

I suppose a computer pet is one solution. The giant insurance company Humana thinks it’s a good one because mass produced screens are cheap these days, a lot cheaper than emergency room trips, nurse visits, or human contact. Humana is funding these cats.

But I would suggest that we can do better.

We know the arts are an antidote to despair, an intervention for depression and a prescription for wellness…for the things that make life worthwhile.

In England and Canada, this year doctors began prescribing the arts. Their research shows that people who participate in the arts are healthier, 60% healthier, and an experience at the theater, or contemplating a work of art at a museum, or writing through your own trauma can help alleviate painful feelings of isolation and loneliness.

The arts increase a sense of well-being. Lower levels of well-being lead to poor health and lower life expectancy.

When you go to the doctor, you want the doctor to make you feel normal again. Last year, you stepped up when we asked you to open your doors and your programming to people struggling to make ends meet, people at 150% of the poverty level who have EBT cards. So far, more than a quarter of a million EBT card holders have used them to access the arts and culture in Massachusetts. One woman who had fallen on hard times told us that trip to the theater was the first time in a long time she’d felt normal.

You are here today to talk to your legislators about the value of the arts. Well, here’s one way to value your work…and it is all about money.

The number one budget buster in Massachusetts is the cost of healthcare. Some 37% of the state budget goes to healthcare. What if there was an affordable, high impact approach to improving health outcomes, that would make lives better and save money.

Humana, the insurance company, says with an animated computer cat it can save $90,000 per patient.   But can it save the patient?

We already have the most extreme inequity in financial security in our history, an inequitable distribution of the GNP. If human contact becomes a luxury, will basic human well-being be inequitably distributed as well?

No, because you won’t let it. Because the human connection is what defines your work.

I look forward to the day when doctors are prescribing art in Massachusetts.

I look forward to the day when Humana will reimburse a museum, or theater, or a teaching artist who holds the hand of a patient and looks into her eyes, before it reimburses an animated cat on a computer screen with a disembodied voice thousands of miles away.

Is this dream the functional equivalent of a moon shot?

I don’t think so. Because you are here.

I haven’t met Bill in Lowell. But I’d like to make him an offer: I don’t want to take away your cat, but I’d like to send you a teaching artist…and a prescription…to dance.

For you and your wife. A dose of dance. And human contact. A bit of the bright side.

Reflecting on Our Advocacy Campaign Victories

Mass Cultural Council has been tasked with the enormous and amazing direction to equitably invest almost $100M in state dollars into the cultural sector this fiscal year!

His new Executive Order advances a whole-of-government policy for the arts, humanities, and museum and library services